No Doubt: Conveying Islam with Compassion and Reason (DHD 100)

This Article is related to the  Open Campus/Free Diploma of the Islamic Online University.

In an age of Science and Reason, certainty can be an elusive prize.

No Doubt is a specialist da’wah course to empower you with the right tools, techniques and knowledge to convey Islam with compassion and reason.

With the recent rise of atheism, scepticism and agnosticism, this course has been designed to empower you to respond to competing religious narratives using Islamic and Western references.

Muslims must be equipped to provide answers to the challenges put forth by modern society. As Muslims, we have a role to fulfil by compassionately and intelligently conveying knowledge about Allah, His revelation and His Prophet (upon whom be peace) to those who do not know it or do not understand it.

Allah says in the Quran: “Who is better in speech than one who calls to Allah, works righteousness and says ‘I am one of the Muslims’?” [Surat Fussilat, 41, Verse 33]

Do you desire to be one of those whom Allah speaks of in this verse?

Do you want to develop the confidence and knowledge required to teach Allah’s message to humanity?

Islamic Online University's comprehensive and dynamic da’wah course is designed to empower you to convey Islam to our brothers and sisters in humanity. This course will teach you that Islam is rational, natural and provides answers to contemporary questions about human existence.

The secret of this course is that it adopts a foundational approach to da’wah. What does this mean? Well, here's a sneak preview:

Many questions, beliefs, worldviews and philosophies: one answer.

What will you learn ? 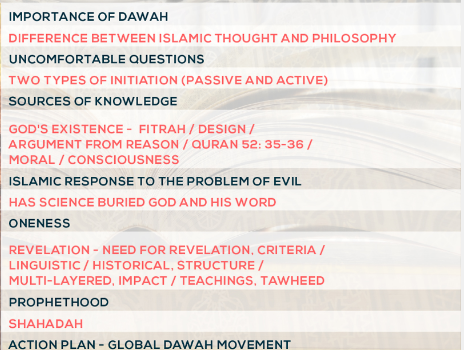 The course is delivered by Brother Hamza Andreas Tzortzis, one of today’s outstanding callers to Islam who has taken the world by storm in presenting Islam to mainstream society using an approach that is compassionate and intelligent, based on the principles and teachings of the Quran and Sunnah.

He uses reason to challenge the opinions and philosophies of existing world views like atheism and agnosticism. He presents valid and authentic evidence from Quran and Sunnah which point to the belief that there is One creator that deserves worship and love.

Hamza Andreas Tzortzis is the head of Education and Research at iERA and is an instructor for prominent da’wah institutions. He is a writer and essayist who has written popular pieces addressing the intellectual foundations of Islam and the area of Islamic Thought. As part of his work at iERA he has contributed to the global da’wah movement by shaping da’wah narratives and instilling passion and enthusiasm. He has edited, developed and contributed to a range of media and material designed to articulate Islam to the wider society. He has travelled extensively around the world presenting Islam at a myriad of academic institutions, university campuses and mosques.

Hamza Andreas Tzortzis studies the principles and particulars of Islamic Thought with a qualified scholar of Islam.

The course is offered for FREE.

Did this answer your question? Thanks for the feedback There was a problem submitting your feedback. Please try again later.